Travelogue for people wanting to look beyond the cliche in travel

The Old Fort or the Purana Qila in Delhi (just opposite Pragati Maidan; and the location where the Zoological Gardens of Delhi) is probably the best example which shows the city of Delhi through different eras.

It is believed that the mound on which the fort stands today was the location of Indraprastha – the capital city of the Pandvas (Mahabharata era city). The existing structures today have been attributed to Humayun, the 2nd Mughal emperor, who at this same location had founded the city of Dinapanah around 1533 AD. When Sher Shah Suri came (1538-1545 AD), he demolished the city of Dinapanah and remodelled many structures. The fort went into the hands of Humayun, the 2nd Mughal emperor again on his return from Persia in 1555 AD and he resided here till his death in 1556 AD; during this period some more construction and re-modelling can be seen.

Today one can see around 8 structures in the old fort – including the gates (Bada Darwaza, Humayun Darwaza, Talaqi Darwaza), Hamam, Baoli, Sher Mandal, Qila-i-Kuhana Masjid (mosque) and excavations from the different eras of Delhi along with the fort wall or rampant.

Enter from the Bada (literal meaning Big) Darwaza (gate) and walk straight. The first structure one would see is the mosque known as the Qila-i-Kuhana Masjid (or mosque). The name of the mosque literally means the mosque of the old fort. According to the existing records it was a congregational mosque of the fort and its construction has been attributed to Sher Shah Suri with completion date as 1541 AD.

The Qila-i-Kuhana mosque with its 5 bay structure and 3 domes is similar in architectural style that of precedents of Sher Shah Suri and Humayun-the Sayyids and the Lodis. 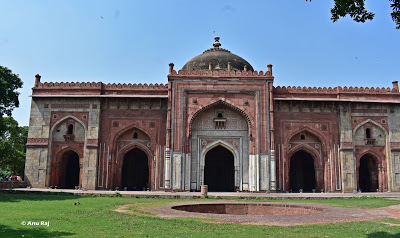 The mosque is built in core masonry of stone rubble bonded with lime mortar. One can also see the use of finished blocks of Delhi quartzite with red sandstone. The prayer hall measures 51 m x 15 m and the centre of the façade is 16.5 m in height.

The large rectilinear hall is divided through massive stone masonry arches into 5 parts. The external eastern façade has 5 archways with central one being sunk in an arched recess contained within a pronounced rectangular frontage – the Liwan (Liwan -a long narrow-fronted hall or vaulted portal that is often open to the outside). The Liwan is ornamented with intricate stone relief and one can see use of red and yellow sandstone, marble and black slate. At the rear of the Liwan one can see an interesting feature (origin of which can be attributed to the Lodi era architectural style) – small minaret called guldastas (literally the floral bouquets flanking the drum and finial, kalash on top. There is one mihrab each in the 5 bays along the Qibla (or the west facing wall- the direction that should be faced when a Muslim prays during ṣalāh, it is fixed as the direction of the Kaaba in the Hejazi city of Mecca).

There are 3 different roofing styles that have been used – Central bay has a single masonry dome with multiple openings in the drum for ventilation, decorated with coloured tile work. The penultimate bays in each side have flat domes or vaults. The end bays are oblong unlike the central and penultimate bays which are somewhat square in shape.   The central space of the end bay has shallow dome while the spaces towards the western and eastern arcade are covered with semi domes – nim gumbad resting on suspended arches which in turn rest on the main lateral arches. 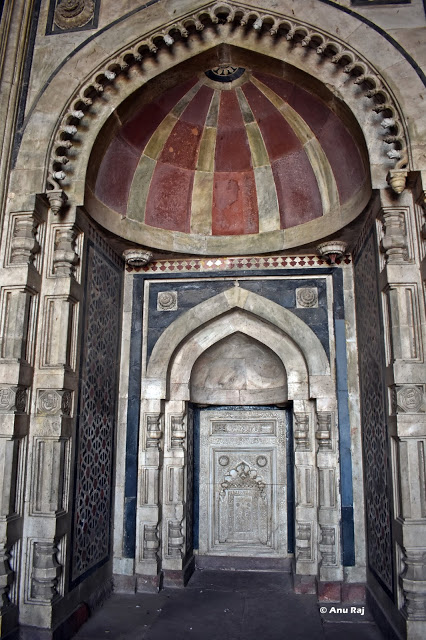 There are 2 octagonal Turrets attached to the rear wall which are structural as well as functional. These turrets along with Oriel windows (An oriel window is a form of bay window which protrudes from the main wall of a building but does not reach to the ground; it is supported by corbels and brackets), decorative brackets, chajjas are reminiscent of Tuglaq style of architecture.

Hexagrams (6 pointed star motifs) along with calligraphy and coloured stone inlays of various geometric patterns are the main ornamentation.

The mosque has private entrances on the north side and the south side for the use of the Royal family. These entrances are now kept closed.

There are internal staircases housed inside the end bays, planned to reach the terrace of the turrets, then further in the drum gallery and finally the terrace. The mosque is a two-storey building. The second storey, accessed through staircases from the prayer hall, with a narrow passage running along the rectangular hall, provided space for female courtiers to pray, while the arched doorway on the left wall, framed by ornate jharokas(cantilevered arched openings), was reserved for members of the royal family. On a marble slab within mosque an inscription reads, “As long as there are people on the earth, may this edifice be frequented and people be happy and cheerful in it”

This mosque is considered to be the culmination of its type and also a prototype for more refined Mughal architectural style. It is an early example of the extensive use of the pointed arch in the region as seen in its five doorways with the ‘true’ horseshoe-shaped arches. Marble in shades of red, white and slate is used for the calligraphic inscriptions on the central iwan, marks a transition from Lodi to Mughal architecture.

The courtyard has a shallow tank, with a fountain (not functional now).

The mosque is the best preserved structure inside the old fort and is worth a visit to under stand the architectural developments and the transitions from different eras and rulers.

A Comprehensive History of Medieval India: From Twelfth to the Mid-Eighteenth Century, Salma Ahmad Farooqui

This site uses Akismet to reduce spam. Learn how your comment data is processed.

To Check the Articles with more pictures Click here

Check the pictures out on Trover

I am an Indiblogger

I am on Zomato